Play with a mouse or touchscreen.

Priscilla's pet Phoenix has returned an egg after a devastating battle and Priscilla is determined to break her out! Help the gang click their way to victory in 5 timed rounds to rebirth Phoenix, repopulate the planet, and defeat a nefarious villain!

I had difficulties with the mechanics and got ending three, but this was a nice game.

Thanks for the feedback. Could you tell me more about the difficulties with the mechanics? I’d like to smooth them out if I can. Glad you enjoyed the game  in spite of the challenges!

About the difficulty... the earlier levels were straightforward, but it was somewhat difficult for me to figure out the best synergies for the various skills that were available as the rounds escalated quicky.

I saw each explanation as it was given, but it felt difficult to put that information into practice as there was a lot going on all at once and there doesn't appear to be much room for experimentation with builds, given the strict time limits.

That makes sense. Thanks for the further explanation.

Congratulation from a Non-Harold! LOL.

I really enjoyed the experience. Congratulations.

Hey that was a blast. Very fast paced and satisfying. The visual and aural feedback was on point. I found the people flying out the of the egg so funny too. I'm not 100% sure the scaling made sense. My points started hitting huge scientific notation numbers, but that was also pretty fun to experience too. This will definitely be a worthwhile entry for judges to play.

Thanks for the feedback, Human! I’m glad you enjoyed it. I’m hoping to rework it before the end of the jam so you might want to play it again to see what changes. 😁

Nice idle game with RPG style. Never seen a timed one on levels before. I enjoyed that each character had specialties that affected the whole team.

Hey, congratulations for the game! It is super fun to play! To you plan to develop it further?

Thanks for playing my game, I’m glad you enjoyed it so much! I originally was not going to develop it further because I just wanted to see if I could make a game in 7 days, but thanks to responses like yours I have decided to spend the remainder of the jam improving it.

That's great! I'd love to see more content! Which engine did you use to make it?

Nice! I never expected an idle game from this jam.

😁 Just trying to think out of the box! Thanks for playing the game and the feedback.

Awesome, glad you liked it! 🙂 Thanks for the feedback.

yes another game of the good variety to be sure, from renowned developer KV_Kingdom

🤩 Thanks for the feedback! I'm glad you enjoyed it. 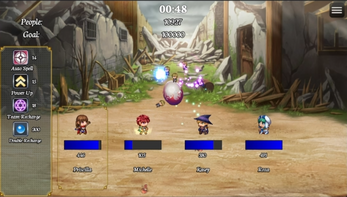 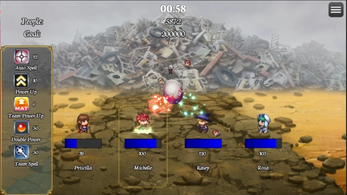 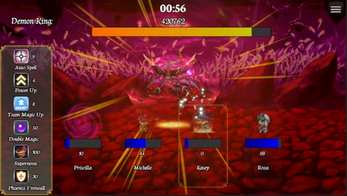